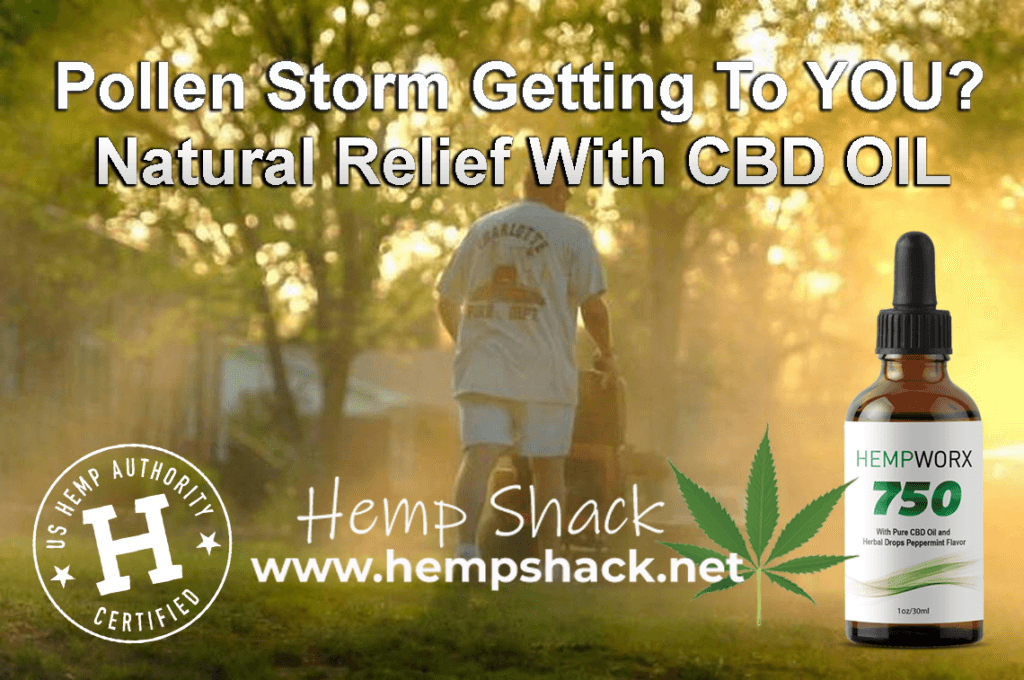 Pollen Storm Attacking YOUR Allergies? Get Natural Relief with our Certified CBD OIL! No jitters, no dry mouth, no negative affects like pharmaceuticals give you!

THC & CBD have been shown to help keep airways open and quell inflammation to help people cope with allergies.

Allergies can be a real pain, both in the physical and metaphorical sense. Chances are you’ve had some sort of allergy, whether chronic, seasonal or as a reaction to certain types of foods. Allergies can result from environmental elements such as pollen, mould and animal hair. They can also occur as a result of inherited allergies, or even as a combination of environmental factors, food and genes. External factors such as climate, temperature and humidity can influence the severity and frequency of allergic reactions, too.

Regardless of why they started and what your symptoms are, it’s important to treat allergies as soon as they begin. If you’re in the search of natural allergy remedies, you may want to consider cannabis. It’s a safe potential treatment that can help alleviate allergic reactions and reduce inflammation.

Allergies occur when the immune system responds negatively to foreign substances in the body. There are lots of allergens floating around everywhere we go. Most of us aren’t affected by these allergens, although folks with allergies tend to have hypersensitive reactions.

Allergies and allergic reactions can cause:

Allergens in the air are more likely to affect the eyes, nose and lungs, while ingested allergens will cause reactions in the intestines, stomach and mouth.

It’s common for the immune system to build up sensitivity to a substance before reacting. This process is called sensitization and can take anywhere from days to years to develop. Often, the sensitization process remains incomplete and while symptoms of allergies may manifest, a full allergy won’t happen.

Antihistamines are the most popular treatment for allergic reactions. However, they often come paired with side effects such as:

You’ve probably heard of the cannabis compounds, or cannabinoids, cannabidiol (CBD) and tetrahydrocannabinol (THC). These cannabinoids help balance the body’s immune and cognitive systems, among other things. Both CBD and THC have been found to alleviate allergies and related symptoms, making marijuana a lower-risk allergy treatment than antihistamines.

RELATED: IS THE ENTOURAGE EFFECT WHY CANNABIS CAN BE EFFECTIVE MEDICINE?

THC is actually thought to suppress the immune system’s response to allergens, thereby helping to prevent allergic reactions and making it much longer for sensitization to occur. Meanwhile, CBD can be a successful treatment for seasonal allergies, because it helps regulate the behaviour and production of white blood cells that react when the body is exposed to allergens. CBD has also been shown to prevent the closing of airways, which can result in coughing and breathing difficulties—common allergic reaction symptoms.

Cannabinoids are effective in treating inflammation, another common symptom of allergies. As the body tries to fight off irritants and allergens, it activates the immune system to remove harmful agents. Inflammation occurs as a response to the irritation and damage that allergens may inflict on cells throughout the body. Marijuana aids against inflammation by activating receptors that will then release fewer cytokines, which are pro-inflammatory mediators.

Allergic reactions and their related symptoms can also cause chronic pain. Cannabis is a safe treatment for both mild and chronic instances of pain. In addition to its anti-inflammatory properties, marijuana is effective at reducing the intensity of pain. Different CBD and THC combinations can be used to target all kinds of pain. Some people prefer high-CBD strains, while others gravitate towards a more even mix of the two.

The Different Kinds of Allergies & How Cannabis Can Treat Them

A 2009 study points to THC as a good cannabinoid for allergic asthma and similar inflammatory responses that obstruct the airway. Cannabis rich in THC can effectively suppress allergic asthma triggered by cytokines. It works by correcting lower airway constrictions that are a symptom of asthma.

Recommended cannabis strains for people with allergic asthma not only contain THC, but also the terpene limonene. Limonene not only gives these recommended strains their fresh and fruity taste and smell, it also works with the THC to enhance its medicinal qualities. If you’ve got allergic asthma, choose strains such as:

It goes without saying that smoking isn’t the best consumption method for those suffering from asthma. Try vaping or eating cannabis edibles instead.

As anti-inflammatory agents, cannabinoids can suppress the immune system without causing the harmful side effects that antihistamines can. Sinusitis, often a side effect of allergies, comprises nasal congestion, cough and difficulty breathing. Marijuana can help ease the symptoms of sinusitus as it’s a bronchodilator, meaning it opens the airways and breaks up congestion. Cannabis is also a painkiller and can be used to reduce inflammation. Dance World and Royal Medic strains are thought to open up the airways, while Cannatonic and the sativa strain Harlequin have strong anti-inflammatory effects.

CBD has antimicrobial properties that may help assuage the effects of seasonal allergies. High-CBD strains of cannabis and CBD oil are thought to open up sinuses and relieve pressure in the nasal cavities as well as guard against nasal congestion. Seasonal allergies cause inflammation in the throat and sinuses, making it difficult to smoke or inhale cannabis without causing further aggravation. Instead, you can consume CBD oil as a sublingual, combined with coconut oil or raw honey in tea for a soothing and healing drink. Or use it in the kitchen to make tasty cannabis edibles for less painful seasonal allergies.